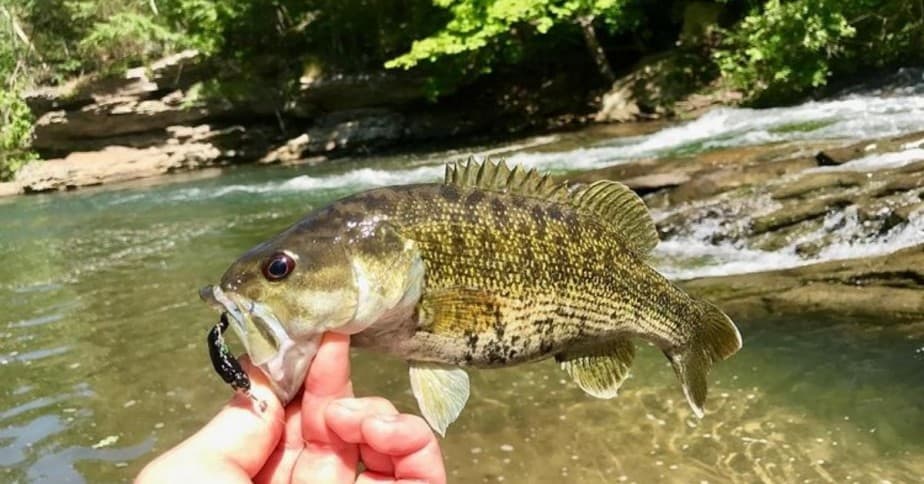 Some fishes exhibit weird characteristics or features that leave anglers scratching their heads and scouring the net for answers. For instance, the catfish is known to produce a sound similar to a dog’s bark, and it has whiskers like your common household pets. Another example is the shark, one of the prominent kings of predators. Sharks have eyelids, and this is quite weird because most fishes are without eyelids. This next example will stun you, and it begins with a question. Have you seen bass with red eyes? If you have, then I bet you’ve wanted to know why.

Some bass have red sight and fishing experts attribute this weird feature to a few things. Firstly, it is said that the red sight of this fish was developed to enable it to navigate the dark. This feature can also be a result of a pigment discoloration in the eyes or it’s simply hereditary.

You don’t hit the water one sunny afternoon and expect to see several basses with bloodshot eyes happily singing the “Hallelujah” hymn. This simply means that this sight is not very easy to come by. In fact, it’s like seeing a bar of gold on the sidewalk. You see, people who have witnessed this weird sight have all visited online forums in search of answers, and it seems they are yet to find a convincing one. If you are among those people, you are in the right place.

Learn more about the reasons some bass have red lips.

Why do Bass Have Red Eyes?

You can’t see the bloodshot sight of a bass and not be terrified. If you aren’t, it means you are one of those few horror movie enthusiasts. Several anglers have come out to share their reaction when they first saw this fish. Most of these individuals were quite puzzled and probably terrified seeing a fish with such an eye color. It is like watching one of those horror movies with bloodsucking-like creatures in them. However, in this instance, it isn’t a movie; you see it in reality.

The bloodshot sight of this fish results from a few things, which I’ll be highlighting below:

Adaptation: According to some experts, this fish’s eyes’ color enables it to navigate dark areas. It was indicated that the result of the coloration is because of the dark habitat of the fish.

Genetics: Genetics can also play a massive role in the appearance of a bass’s sight. This simply means that such eye coloration was inherited.

Learn more about the reasons bass might have bloody tails.

What Does it Mean When a Bass Have Red Eyes?

If you are a bass enthusiast who loves catching this fish with passion, there is a huge chance that you belong to a certain online forum where they discuss stuff related to this particular fish. If you aren’t on such a forum, then it is possible that you conduct searches related to this fish. During one of your searches or probably a time out on the water, have you heard about or seen a bass with bloodshot sight? If you have, then I bet you’ll be very eager to know what it means.

The red eyes of a bass are not something you should be scared of; rather, you should admire it. This feature indicates the presence of a pigment discoloring in the fish’s sight. It is this pigment that gives the eyes of the fish such color.

Several anglers out there have confessed about seeing this fish with such eye color; however, only a few understood what it meant, while the rest were probably scared and puzzled. Of course, it isn’t lovely sight, but it’s quite memorable because there are lots of people out there who would kill to experience such.

Learn more sbout the reasons why do bass get worms.

Why do Largemouth Bass Have Red Eyes?

For those who have seen this rare fish, what was the first thought that came to your mind? Run away from this horrifying creature? I doubt! For some of us, if not most, the question on our mind was, “How on earth does this fish have bloodshot sight?” Of course, everyone wants to know why because it’s a very weird thing to see. It’s just like coming home to find your dog singing your favorite song or seeing your three-year-old kid drive your car like an expert.

The red eyes you see in a largemouth bass are simply a pigment variation in the fish’s eyes. This pigment is the prime cause of the reddish appearance of the fish’s sight.

So, when next you see a largemouth with such sight, don’t fret; it’s not one of those bloodsucking creatures you see in horror movies. It is simply a poor fish with bloodshot eyes and nothing more.

Learn more about the reasons why do bass change colors.

Do Smallmouth Bass Have Red Eyes?

The wild is home to several animals of which some unique. Out there, you find some species of animals exhibiting uncommon features. One of those unique features is bloodshot eyes observed in the largemouth. However, since this particular fish has this weird feature, we must find out if its counterpart, or cousin, the smallmouth, has the same feature.

Of course, the smallmouth bass has bloodshot sight. This attribute can result from pigment discoloration or probably genetics, as those are the explanations that make sense. Some anglers believe that it has to do with spawning, but such a claim has been refuted.

Some people liken this fish’s bloodshot sight to ruby, while others liken it to the sight of a drunk individual. Both are somewhat true, anyway. So if you are yet to see one, you can take a little insight or cue from the descriptions.

Learn more about the reasons why do bass like worms.

A bass with a bloodshot sight is not something you see day in day out. You can’t simply wake up one day, walk to the river or any water body to see one of these fish. It doesn’t work that way. In fact, according to some anglers, the sight is rare. So, here is a terse description of how it looks like for all those who are yet to encounter or gaze at this fish.

A red eye bass is like a normal fish. The only difference between this fish and others is the color of its eyes, which results from a few things, with pigment discoloration being part. If you have seen an individual with a bloodshot sight before, that is exactly how the sight of this fish looks like. It is red, and nothing extraordinary.

Contrary to what some funny anglers may tell you, a bass with bloodshot sight doesn’t look like the devil’s pet, neither does it look like a vampire or one of those terrifying creatures from horror movies. This fish is a normal fish with red sight.

How do you Catch Red Eye Bass?

As an angler who is keen on catching one of these red sight fishes and probably studying or eating them, one major obstacle you will have to scale through is getting their location. After you must have the next thought on your mind should be regarding how to capture them. So, how do you capture these fishes? Do you use a special technique because of their bloodshot eyes?

You can catch a red eye bass using the usual technique. The fact that they have a bloodshot sight doesn’t make them invisible or super-strong. Scour covers for the fish and then catch them using the usual lures and tackle meant for this fish.

Catching this fish is not difficult. Provided you have the tackles made for this fish; you are good to go. Besides, you must have the guts because capturing a fish like this requires a fair amount of gut.