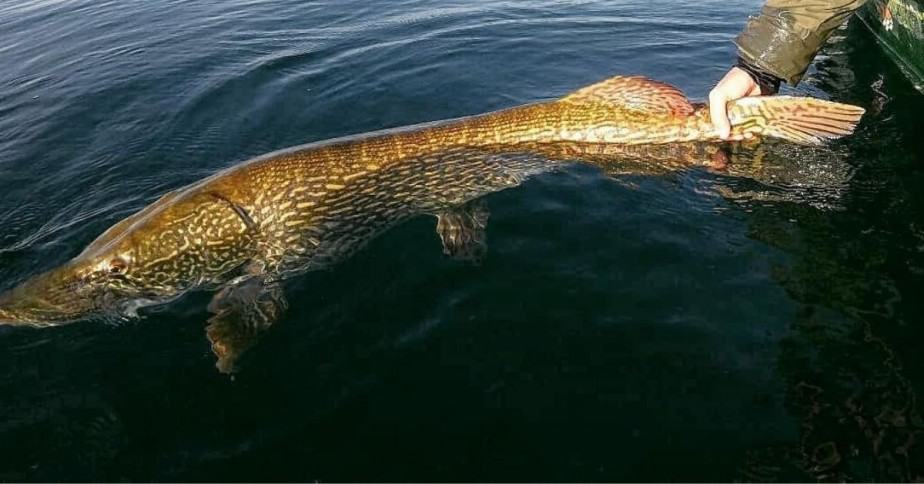 Pike is one legendary fish that has been around for a while. Lots of long-time anglers are aware of this fish and what it feels like to capture one. Simultaneously, novice anglers can only look forward to the day when they have a close-up encounter with one of the most vicious fishes in the aquatic world. Pikes are tough, unlike the usual fishes you see every day. They are prolific hunters who’ll eat just about anything that can enter their mouth. For those who are yet to encounter this fish, I guess you’d want to know how it looks like.

Pikes have an appearance that makes them look like a pole-weapon regarded as a pike. It has an alligator-like head, and it is often olive green in complexion with a shade of yellow or white along its underside. Its sides have little rectangular-like spots followed by some black spots on its fins.

Pikes look like a fish that could cause a lot of trouble in their habitat. Their mouth’s structure, body size, and sharp teeth prove the significant threat they pose to smaller fishes or other unfortunate mammals. In fact, these vicious fishes sit on the top of their food chain and they have no predator to be scared of aside from humans. So, I bet you now have a little cue of how feared this fish is in the aquatic realm. Let’s delve into more interesting stuff about this fish.

Learn more about the best rods for pike fishing – reliable and very affordable.

Pike are linked with fishes that belongs to the genus of Exos (a Greek word for long-bodied fishes). These fish species are as aggressive as most of the aggressive fishes you know, and I guess that is why most anglers fancy this fish. Indeed, everyone enjoys the fun that comes with catching an aggressive fish. The chase, the struggle, the action and all create a moment you will find had to forget. However, if you are a novice angler; don’t get your hopes high as catching this fish isn’t a walk in the park. You can ask those who have had an encounter with this formidable predator.

Pikes are not very common like the tuna fish. You wouldn’t see them gallivant in the open sea, neither would you see them staring at you like dolphins. If these fish species aren’t somewhere spawning, they’ll be somewhere hunting for their meal which ranges from frogs, birds, smaller fishes, insects, and other small mammals. For those who have seen this fish before, I know it was worth the sight. However, for those who are yet to view this fish, here is a lucid description.

The biggest ever pike to be caught was 55-pound, and it was caught in Germany in 1986.

What Color Is Pike?

There are several pike enthusiast out there. We have those who love to catch this fish and those who choose to admire this fish from afar. Whichever category you fall under, I bet you would like to know more about this fish.

As an angler, regardless of your expertise, good knowledge about this fish would complement your fishing tactics out there. On the flip side, if you are interested in this fish but lack the courage to go after it, a little piece of valuable information would give you an ideal insight into this fish. When it comes to describing a pike, one thing that would strike every inquisitive mind is its color. What is the true color of this fish? Is it black? Grey? Lemon? Greenish?

Pikes are olive green in color. They have a yellowish-white underneath while their flanks are adorned with colored spots that match the color of their underneath. Sometimes, the fins of a pike are reddish.

A pike’s colour can be quite confusing, and I guess it is simply because it’s not blue, black, yellow, or some kind of primary color. An angler might tell you that pikes are green while another may give you an answer that contradicts the first. You really can’t blame those people because it is kind of hard to identify tertiary colors and humans tend to perceive colors differently.

So unless you are good at identifying colors, you wouldn’t identify the color of a pike correctly. You may call it as green or simply lemon because its color actually resembles green. Though knowing the color of this fish may not be enough to help you differentiate it from its cousins, the muskies, you can always use this information to enhance your knowledge about this fish.

Does Pike Have Big Teeth?

Pikes are a well-known predator fish. Looking at them closely, you tend to see why they still hold their position at the top of the food chain. These fish species hunt and kill like a professional assassin. They have the energy, the vision, and senses to catch their prey unawares. Their aggressiveness is also a testament of how unwilling and cruel this fish can be.

Pikes have a huge appetite and would eat anything that they can get into their teeth-filled mouth. They eat small fishes, birds, frogs, and other little mammals that are unfortunate to encounter this fish. But wait a minute; if this fish can consume a frog, it means they have massive teeth, right?

Pikes have big teeth which play a significant role in their feeding. Like some other fishes, a pike’s teeth come in several rows and are around an inch long. These sharp teeth are instrumental in tearing preys like butter.

A pike would be less feared without the scary teeth it possesses. In fact, if a pike’s teeth weren’t as long as it is, it would have been a picky eater. These teeth don’t just help a pike devour its preys; they also help it keep prey from making a run for it. The number of teeth in a pike’s mouth varies. Of course, younger pikes will have lesser teeth while older pikes will have more. The biggest pike fish caught had 700 teeth in its mouth. That said, a pike can have from 300-700 teeth in their mouth as they grow.

Does Pike Have Scales?

Pikes have several features; some are distinctive while some are common. As an angler, it’s best to treat every information about the pike like a valuable artifact as you never know when they will come handy. Having already provided you with a lucid description of what these fish species look like, including its color, and the type of teeth it possesses; its best we move to something else. Most fishes have scales, and I believe you’d want to know if this common feature is present in this particular fish species.

Pikes have scales like several other fishes out there. The scales of this fish have uneven rows of yellow or gold bar-shaped spots. Pikes don’t have lots of scales on their body. The gill cover of this fish lacks scales.

The scales of a fish has several functions. The most important function of this feature is protection. So, the fact that a pike’s body is covered in a few scales gives it more advantage when hunting.

Where Do Pike Fish Live?

Fishing for pike and making a substantial catch is never easy, you shouldn’t let anyone fool you. Nothing good comes easy. So if you want to catch a fish as good as the pike, you will have to put in the work. And one way to go about that is by doing good research—Surf the net for fishing effective fishing tactics that you can quickly master. Also, you’ll need to inquire about the best tackle for the job. And most importantly, you will need to know where the fishes reside.

Pikes are easy to locate if you know where to look. To find this fish, you’ll have to scour sluggish streams and shallow, weedy locations in lakes and reservoirs. You can also find these fish in cold, clear, and rocky locations.

Pikes aren’t like tuna; they don’t exist in all the water bodies in the world. So to find these species of fish, you will need to go to search the right places. Looking for pike in the wrong location is like searching for a mouse on a sea bed. You will surely end up frustrated, and frustration is not good for any angler.