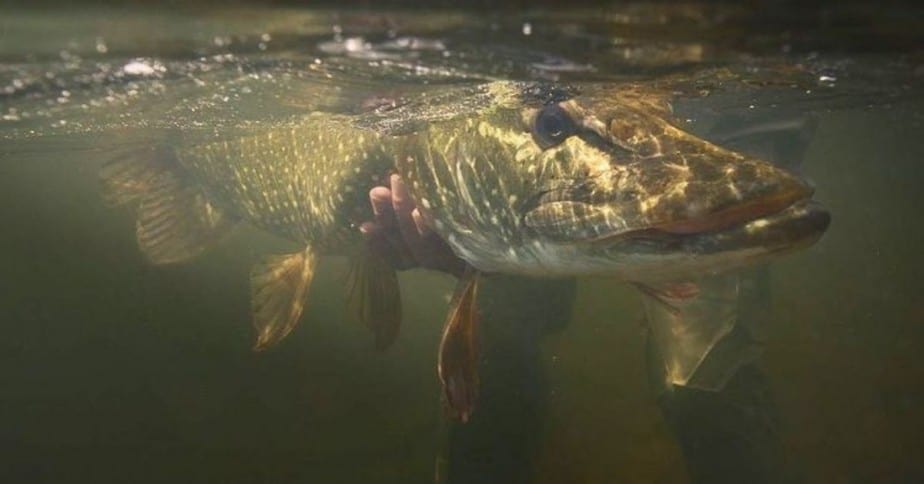 Pikes sits on the top of the food chain. In fact, you can refer to this vicious species of fish as an apex predator. The amazing attributes these fish possess doesn’t make it scary (not to us); rather, they make them an exciting species of fish to go after. However, there is a little exception. In some states, fishing for pikes during their spawning season is prohibited. You could land in trouble if you are caught doing so. So, to ensure that you steer clear from the trouble that could result in you paying a hefty fine or cooling off your heels in jail, you need to know when this fish spawn.

Spawning season for pike can begin as early as February in moderate winter or cease as late as May after a cold spring. Just like some other fishes, this special season is usually dependent on water temperatures.

The spawning season is usually the time when female pikes lay low to carry out their reproductive duties. During this period, these species of fish are usually very vulnerable. However, to ensure that this fish population is balanced, you may be prohibited from pike fishing while the season is on. Though in some countries, the law doesn’t exist. So ensure you do your research before you catch pikes during their spawning season. Also, the pike fishing ban period differs for each country, so be sure to do your homework on that as well.

Learn more about the best rods for pike fishing – reliable and very affordable.

Pike spawning season is the period when these species of fish lay and fertilize their eggs. The spawning process, which I believe is a blissful moment for pikes, usually last for several days. During this period, this species of fish select a unique location and lay their eggs. They usually lay a few eggs at a time in different areas in the water.

Pikes spread their eggs along the river or lake, with some getting attached to vegetation and other water elements. This species of fish spawn during a specific period of the year. Their spawning period is usually during early spring in March and April when vegetation starts to sprout. During the spawning period of this fish, pike anglers are banned from catching these fishes as doing so could affect this fish’s population. The ban is absent in some countries anyways.

After hatching, pikes are known to grow fast thanks to their excessive feeding habit. Little pikes usually feed on anything that can enter their mouth, be it little insects or anything else that moves. As soon as they have attained a considerable length, they change their diet and hunt for smaller fishes like the predators they are.

During spawning season, female pikes seldom hunt for food as they would normally. They often stay with the eggs until the season is over. After the end of the spawning season, female pikes leave the eggs to develop on their own and go out to hunt for prey. During this period, any prey it finds would be very sorry. They would consume anything that fits in their mouth. Female pikes are usually bigger than males, so they definitely have the advantage.

How Long Do Pike Spawn?

The spawning season for pikes is when eggs are laid by the females and fertilized by the male’s sperm. It is basically the process of reproducing pikes. Professional anglers often look forward to the spawning season because of what comes after. After the spawning season female pikes go into a feeding frenzy, they eat whatever can fit into their mouth, including the males. This bizarre feeding frenzy makes them big, and that is why pro anglers often look forward to post-spawn. However, most anglers aren’t aware of the post-spawn period because they don’t know how long it takes for this fish to spawn.

Pikes spawn for 3 months. The spawning season for pikes begins in early February and is concluded in late April. The duration of this period isn’t usually constant; it varies according to the temperature and location.

Knowing how long these fish species spend spawning will help you strategize, especially when you live in a country that prohibits catching this fish when they reproduce. However, if you reside in a country where this law isn’t applicable, having this information, will surely benefit you.

Where Do Pike Go To Spawn?

Like other creatures out there, the pike fish reproduce, and they do so during a specific time of the year. During this special period, the male pike persuades the female to release her eggs after which he fertilizes it with his sperm. After a few weeks, the fertile eggs hatch and lo and behold, a new generation of pikes emerge. I bet you probably know all this, but one thing most of you don’t know is the locations where these species of fish reproduce.

Pikes spawn in a locations that include marshes with grasses, sedges, rushes or aquatic plants, including wetlands. Mature females usually migrate to shallow water with slow currents where their offspring will likely survive during reproduction.

During spawning, pikes don’t just lay their eggs in specific locations. They do this for a few reasons. First, they spawn in these locations to keep them safe from predators and to ensure that they survive. Lastly, they lay their eggs in areas that wouldn’t hinder their fertilization when the male does his thing. The location’s temperature, including the current, are essential factors when considering an ideal spot for spawning. Worthy to note is that pikes don’t spawn their eggs in a specific area; they usually change location, spreading them across the ocean or lake.

At What Temperature Do Northern Pike Spawn?

Spawning is a word that is very common in the fishing world. It is a process whereby mature female fishes lay eggs that are fertilized by matured males. During this period, which occurs at a specific time of the year, the female pike selects an ideal location to spawn. After spawning, she watches over her eggs with the help of the male. Spawning season is a very special period for pikes. However, this process wouldn’t be possible if certain requirements aren’t met. One of these requirements, the most important I would say, is temperature. So, that begs the question, at what temperature do pike spawn?

Pikes spawn when the temperature is around 40-48 degrees Fahrenheit. The temperature must be right for this fish species to reproduce, if not, fertilization may be hard, and their offspring may not survive.

Early February to late April is the ideal time for spawning because the temperature during that period is appropriate for the process. If your location allows catching this fish during the spawning period, you would want to target the males because, during this period, the females are usually busy. However, after everything is done, ensure you go after the females who should be bigger and more fun to catch than the males.

How Many Eggs Do Pikes Lay?

Pike is one unique species of fish you would want to go to school to learn about. However, that would be ridiculous, wouldn’t it? You see, as an angler, there are several things you need to know about this fish. These details, which cover fishing techniques and other vital aspects of this fish, can help you become a successful angler. Now that we are aware of certain crucial information regarding how this fish spawn, it is best to narrow down our focus to one fascinating aspect concerning the number of eggs they lay. So, how many eggs do these species of fish lay?

A pike, like most fishes, lay lots of eggs. However, you should know that not all the laid eggs will be fertilized. And not all the fertilized eggs will eventually hatch. Also, not all the hatched egg will survive. The number reduces per stage. For instance, a pike that laid around 25,000 eggs may lose around 1,000 eggs due to some reasons, one of which is the water temperature. If the temperature of the water is not conducive for the eggs, they will definitely not develop. Also, a pike could lose its eggs to predators.