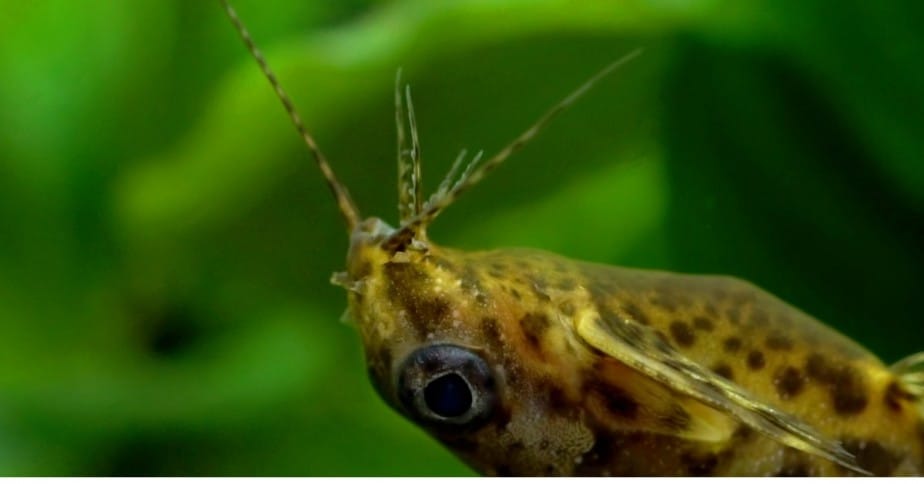 When you see a fish swimming upside down, you can think of it as being sick or even dead, but that is not always the case and there might be other reasons behind that. We do not see many fishes swimming upside down, don’t we? Today I’m gonna talk about, in my opinion, very unusual upside down catfish behavior – upside down swimming, the main reasons for that and other interesting facts throughout the article.

Scientists believe, that swimming upside down in oxygen deplete waters allows catfish easier access to water as opposed to other fish who have to continuously turn over, thus using a lot of energy, to get a breath of air. Furthermore, it may give these species access to food that other species aren’t utilizing.

Synodontis Nigriventris is a surface-feeding air-breather that swims inverted with its zoological ventral side towards the water surface. This behavior leads to assumption that the catfish has a specified gravity information processing system. Some findings suggest that Synodontis nigriventris has a high ability to keep upside-down posture and the gravity sensation in this catfish is likely to contribute to its different postural control from that of many other fishes.

Why do Catfish Swim Upside Down?

Upside down swimming can be useful according to some hypothesized reasons. While most other catfish species spend their time perusing the bottom of their habitats, upside down catfish are most frequently seen towards the top of the water column. Here they’ll consume bits of detritus algae, seeds and other plant materials, insects larvae and more.

Hanging out towards the surface can also come in handy when water conditions aren’t favorable. Upside down catfish are able to take gulps of air as a means of obtaining oxygen in otherwise oxygen deplete water environments. By doing so, they can more efficiently survive in environments where other catfish species may struggle or expend more energy.

That ability can be critical for survival when the water becomes depleted of oxygen, a condition called hypoxia — which occurs naturally in some river systems, especially if they are marked by low light and dense vegetation, as in swamps.

Learn more about the reasons why catfish have whiskers.

When human activity, such as industrial pollution or farm runoff, causes hypoxia, the results are more catastrophic. The contamination feeds algal blooms and ultimately bacteria that consume the water’s oxygen. In places as far-flung as the Gulf of Mexico and Africa’s Lake Victoria, human-caused hypoxia has led to large-scale die-offs of marine life, called dead zones.

Swimming upside down at the surface has brought about some changes in these fishes as well. Speaking specifically in regards to what is considered the upside down catfish, the pattern of coloration across their bodies has flipped. Instead of being darker on top and lighter on bottom, upside down catfish are the opposite. This tactic aids them in avoiding predation themselves, plus they probably have a decent view of the water below them which might give them a chance to avoid predators.

Upside down catfish are usually only a few inches long, so they make an easy meal for other larger fish, as well as birds and fish eating mammals. Blending in can help keep them off the dinner menu. It doesn’t hurt that they’re more active at night and less likely to be seen by predators.

How the upside down catfish specifically reproduces seems to be relatively unknown, though some account indicate that they breed after heavy rains producing hundreds of eggs that hatch within a week. The start to show signs of upside down swimming by the age of two months.

Learn more about the reasons why catfish have slime.

Only a limited number of successful spawnings have occurred in an aquarium. Upside-down catfish prefer cave spawning. Offer an overturned clay flower pot or two or even some PVC pipe as a possible spawning location. Condition the breeders with live foods. Soften the water and use a water can sprinkler to add colder water to the tank, mimicking the spring rains. This will increase the likelihood of successful breeding.

Eggs will generally be laid on the roof of the cave, and up to 450 eggs may be laid. Unlike South American Corydoras catfish, both parents may be left in the tank after spawning, as they will tend to the brood. The eggs hatch in approximately two to three days and the fry will feed off the yolk sac, which they carry for an additional four days.

In nature, the upside-down catfish feeds primarily on insects at the surface of the water, and it often scavages the undersides of submerged branches and logs for worms, insects, and micro-organisms. Swimming upside-down makes these areas easier to access. Omnivores, they will also graze on the available algae to supplement their diet.

In the aquarium environment, they adapt readily to all types of foods, from dry to live to frozen. Offer some sinking catfish pellets, freeze-dried bloodworms, tubifex, and frozen foods like bloodworms and blackworms. For optimum health, provide a varied diet that includes insect larvae when possible, particularly mosquito larvae. Live foods offered at the surface of the water or below will always be readily accepted. Feed vegetable matter in the form of shelled peas and cucumber even if they clean your aquarium algae.