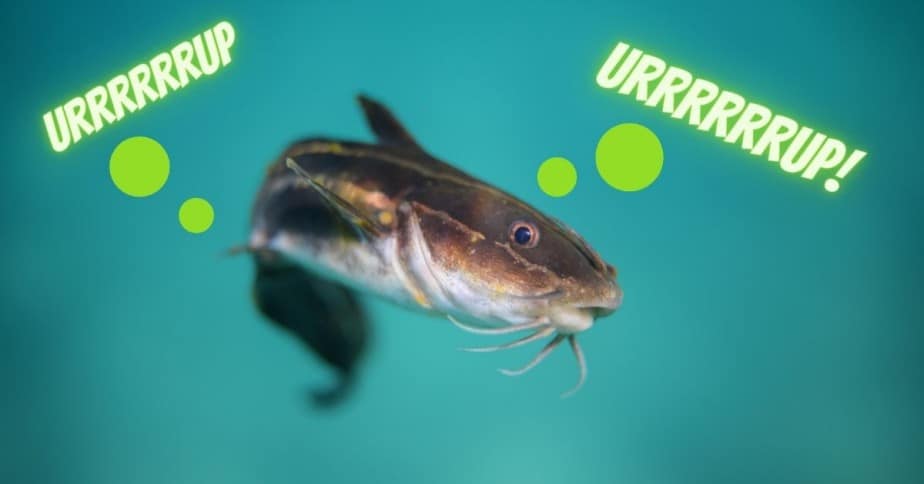 Catfish is one of those fishes that boasts of several unique features. They have cat-like whiskers, they have no scales, their eyes look small and inactive, and they croak. Yes, catfishes make those weird Urrrrrrup Urrrrup Urrrrup noises that resemble that of a frog. But come to think of it, have you ever imagined why this fish croak?

Catfish croak for mainly two reasons. The croaking sounds are a form of disturbance calls or a way of defending themselves by warning predators of the presence of a sharp spine they possess. The sound varies in frequency, duration, pattern, and loudness and is made when the pectoral fins glide forward.

When you try to unhook a catfish from your hook, you may hear the noise that sounds like a huge burp. Catfish vibrate when they make this weird sound as it is the result of its spine base coming in contact with its bone. If you have always wanted to figure out why catfish croak, how long it lasts, or how they do it; you are definitely at the right place. I’ll be shedding light into some important questions regarding this weird sound catfish make.

Learn more about catfish fishing techniques and tips while fishing in a lake, river, pond or at night.

Why do Catfish Croak?

Catfish are professional croakers, and all species make this weird sound. Sometimes, you may find it hard to differentiate the croaking of a frog from that of an actual catfish because they are almost the same. Just like frogs, catfish croak for a few reasons. They don’t just croak because they feel like or because it is one of those inherent traits they possess.

A catfish will croak when threatened. It is like one of their major defense system used to ward off predators. So it is likely that a hooked catfish will produce this sound. The croaking sound produced by a catfish is as a result of the friction between the base of its pectoral spine and its pectoral glide. It is just like when you grind the ball and socket joint of your shoulder.

According to some research, it was discovered that the croaking sound varies with the size of the fish and some catfish prefer to make the sound with their left or right fin. Indeed catfish are quite fascinating. But I think most anglers go for them because they are very delicious!

Learn more about catfish reels which are very effective!

How Long Do Catfish Croak Last?

The croaking sound of a catfish doesn’t last forever. This sound will end when the fish perceives that it isn’t in danger. This means that a catfish will likely croak when lifted out from the water. However, there is a huge tendency that it will stop as soon as it is placed back in the water. In a nutshell, a catfish will stop croaking when it isn’t stressed.

Just like other animals that make weird sounds, the croaking sound made by a catfish has its limits. It ends when the fish isn’t in the situation in which the sound was made. Though sometimes, the sound occurs naturally regardless of it being stressed or under attack.

When Do Catfish Croak?

Like other animals out there, catfish don’t croak for any reason, just as lions don’t roar for zero reasons. There is always a purpose attached to the sounds these animals make. Many anglers are yet to figure out why catfish croak. Some think it’s a useless sound they make for no reason, while others believe they croak to warn other cats of impending danger. These assumptions are not true.

Catfish croak when in distress just like you would likely scream when been chased. It is like their main defense system. They croak to alert the predator of their sharp spines which can hurt. A catfish will not croak for no reason.  So if you hear this croaking noise, it is an indication that the fish under distress or is being attacked.

All cats croak, however, the frequency, duration and other factors varies per catfish. When a cat croak, you’ll observe that it fins move back and forth. The noise is as a result of the back and forth movement of the little bones present in the fins.

Here you can learn why catfish are so slimy.

The croaking sound of a catfish sounds like a little burp. If you have heard a frog croak, then you don’t need to listen to a catfish croak because they are almost identical. The only difference between the two is that a frog’s croak is louder than that of a catfish. In addition, the purpose of both croak differs.

How do Catfish Croak?

Lots of anglers have heard a catfish croak; some are aware of the few reasons why they croak. However, not everyone knows how they make this croaking sound. Where does the sound come from? What makes the sound?

Catfish croaks are created during forward fin swipes. This sound occurs when the ridges located on the spine’s base make contact with a bone known as the cleithrum. Whenever a catfish croak, look at the pectoral fins, you’ll observe the back and forth movement of these fins; this happens whenever the sound is created.

The croaking sound made by a catfish actually emanate from those fins and not their mouth as some people believe. A catfish will make this sound when caught; it is like one of those distress sounds animals make. However, when you put them in the water, the sound will likely stop.