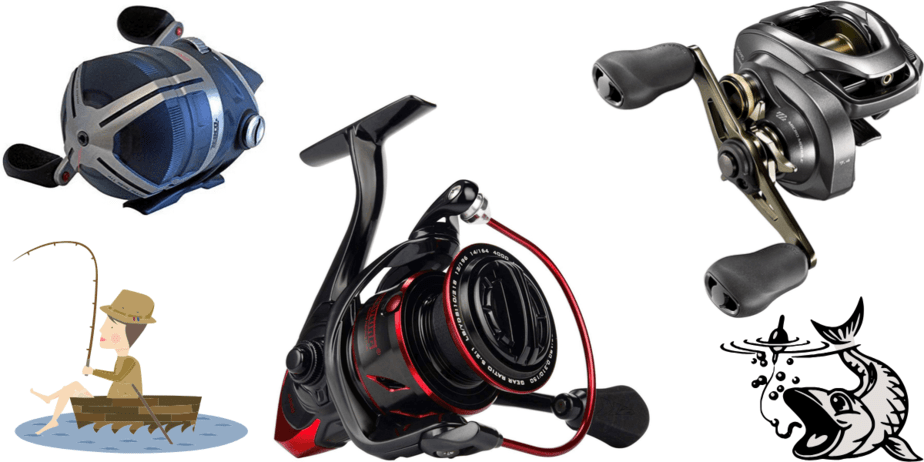 As an angler, a committed one, it is important you know of the difference between different types of reels. In selecting the perfect fishing reel for your use, it is crucial you know that which suits you and your fishing endeavors. Immediately you know the rod you want to purchase; the next step is to consider the reel to adopt.

There are three main types of fishing reels available on the market which are: baitcasting reels, spinning reels and spincast reels.

If you are not sure how to go about finding the ideal reel, or you don’t know what are the types of reels that are out there, this article will give you an insight in that regard. You also get to have in-depth knowledge about the primary types of fishing reels present in the fishing world. Sit back, relax and assimilate each details of this content as we fill you in on the types of reels.

Learn more about the best baitcasting reel which is quite affordable for all.

What are the Different Types of Fishing Reels?

As an angler, you must have an in-depth knowledge of the primary types of reels; this could be beneficial to your fishing profession because this variety of reels are beneficial in diverse types of fishing. An angler who has done his homework about different types of reels would know that bass fishing is performed with a baitcasting reel and not a spinning reel; such a person would also know that saltwater fishing is mainly performed with saltwater fishing reels.

There exist three primary types of fishing reels, spinning, spincast, and baitcast. All three fishing reels are designed with similar principles; casting a line in the desired direction. But each type also has diverse functions and features. Being aware of each, differences, and features will assist you in making a wise decision when choosing a fishing reel for your fishing adventure.

This reel is one of the most popular and the most advanced types of reel out there. The baitcasting fishing reel is often regarded as the “big boys ” reel simply because it is mostly adopted by professional anglers and not a novice like the spincast reel.

Novice anglers asking often shy away from using this reel because it requires lots of skills and experience to effectively cast them. With this reel, the bait spins as the line is ejected. Though baitcasters are often hard to master compared to spinning reels and spincasting reels, this type of reel offers the best casting distance and accuracy. So, once you get accustomed to this efficient reel, you’ll enjoy it because it’ll help you enhance your fishing game. A baitcaster also offers its users a fast and strong retrieve, which makes them the ideal choice when going after powerful, bigger, and heavier fishes like bass fish, etc.

Though this reel provides its users with the best accuracy and casting distance, one of the most unpleasant downsides of this reel is its susceptibility to backlashing and line tangles. You really have to be in charge of feeding out the line with the aid of your thumb when utilizing a baitcaster. Due to the advanced design this reel comes with, it is quite expensive unlike the spinning reel and the spincasting reel. Baitcasters are also known to be designed with larger range of gear ratios available. Though, irrespective of the fact that a baitcaster isn’t cheap, you can find baitcasters under $100.

No doubt, a spinning reel is the most popular type of fishing reel out there. This type of reel comes with an open-faced design and it is very user-friendly; in other words, easy to cast, unlike the baitcasters. A spinning reel is often utilized by beginners because it is very easy to use and operate. Spinning reels cast easily, they are very accurate and they can cast further than spincasting reels.

This type of reel also boasts of a great line capacity; this denotes that you can place a good amount of line on it. You can also purchase this reel with an additional spool which makes changing it quite easy even when you are out on the water. This reel is designed with a fixed spool that allows the line to flow on the cast without interruption; thus, making an ideal choice for light lures. The reel suspends under the rod, so it has a cool and balanced feeling. A spinning reel is perfect for experienced anglers because they can be complicated to use sometimes, especially for beginners.

Although spinning reels were designed to make longer casts and are also accurate compared to the spincasting reels, they are pretty expensive. Also, spinning reels aren’t really effective when being used with heavier lines. There exist several types and models of this reel, and an angler, it’s best you adopt that model which you feel would serve you better.

If you are a novice angler, it is recommended that you go for either a spinning reel or a spincast reel because they are more user-friendly than the baitcaster. If you are keen on adopting the baitcaster, there is no crime in trying, with the aid of some videos and mentorship you can eventually master the use of a baitcaster and enjoy the benefits that comes with this fishing gear.

This reel features a close face; you’ll find all the significant components inside, beneath a nose cone. The fishing line of this reel is always fed out of a little opening in the lid. There exist a button located behind the reel which you hold down when making forward casts. While casting, when you hold down the button, the line comes out, and when you do otherwise, the line stops.

This type of reel is user-friendly, which is why most beginning anglers choose to adopt it. You won’t have to worry about the tendency of backlashes with this type of reel, and there exists no chance of issues relating to twisted lines. The spincast reel is also regarded as the less expensive amongst the other fishing reels. The downside of this reel is that it isn’t really accurate and it doesn’t have a long casting distance.