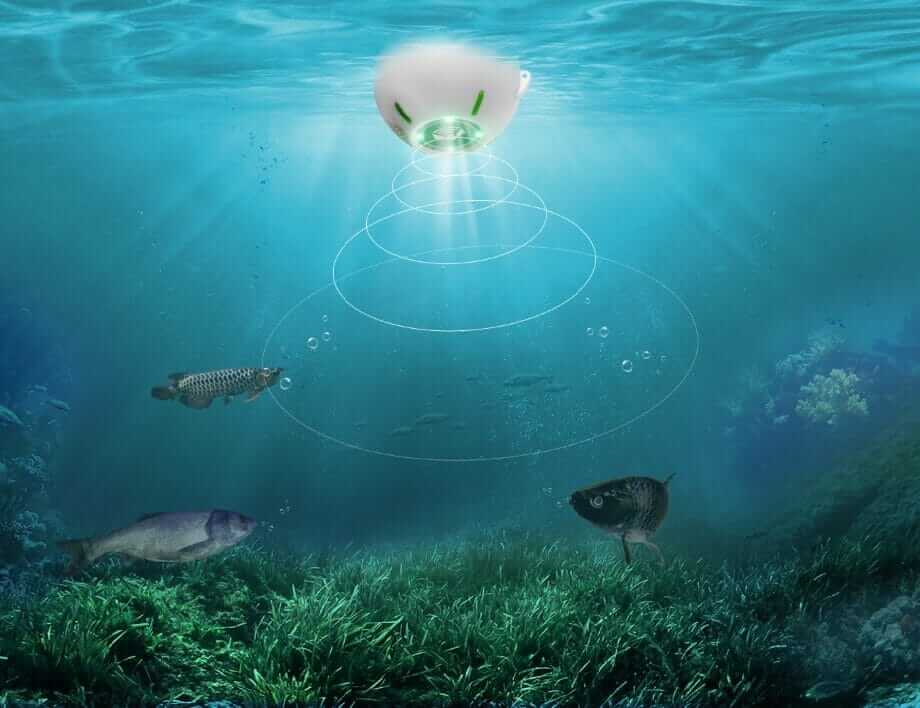 As an angler determined to catch some fish, there exist three challenges that you would need to surmount. You need to attract the fish to strike the bait or lure, play the fish, and correctly set the hook to get it up the boat.  Nevertheless, before you face any of these challenges, you need to overcome the hardest one first, which is finding the fish.

Up until recently, anglers had to depend on their observation, intellect, and initiative to locate fish, but a few years ago, fish finders were invented. This device has made fishing quite easy, but some anglers believe that the use of fish finders can have a somewhat negative effect on their fishing endeavors, the reason being that these sonar devices can sometimes be detected by the fishes, and can consequently scare them away. Before we answer the question “Can fish detect fish finders?” it’s best you have a little insight on what a fish finder device is and how it operates, this will enable you to make your judgment as well.

It is almost impossible for fishes to detect fish finders, simply because they don’t produce enough noise or waves that are capable of making them detectable, neither is the frequency that their transducer transmits audible enough to scare or to notify the fishes of impending danger. Most transducers produce ultrasonic waves, and these waves can’t be heard by fishes, thus making them less detectable.

Learn more about the range of a fishfinders.

Of course, we humans can hear the sound of a running transducer, but that is simply because humans can hear sound waves from 10HZ to 20HZ, whereas most fish can’t hear frequencies higher than 500HZ to 1KHZ, and most transducers come with frequencies higher than 1KHZ. If the fishes can’t hear these ultrasonic sound waves, then how would they be able to detect that a fish finder is around?

A fish will only detect a fish finder if it creates ripples in the water, or it produces a sound loud enough to be heard by these fishes. Since fishes rely on the information provided by their lateral lines and swim bladder resonance to ascertain danger and feed, they will unlikely detect the presence of a fish finder because the device doesn’t give off any signal that can be picked up by these sense organs.

What Is A Fish Finder?

A fish finder is a device used to detect the presence of fishes. They send out high-frequency sound waves into the water, which reflects off the solid object on their course. The device then gathers the reflected signals and process them with the aid of a small computer circuit. Afterward, the processed data is then displayed as a visual image of the water underneath. As the fish finder moves across the water surface, the visualization moves as well, creating a steady 2D image of all that underneath the water.  The image will provide you with an idea of the number of fishes you have underneath the water, including the depth. Fishfinders can even point out the type of fish you are after, and it can as well give you water temperature.

Put, anglers use this device to find fish. Fishfinders make it much comfortable to target areas where fishes are present, and you can as well utilize waypoint maps on this device and GPS to take a record of these areas and come back to them. Fishfinders have successfully eliminated the need to swing your line and pole off the boundary of a boat, hoping to catch fish.

How Does Fish Finder Work?

Fishfinders utilize transducers to transmit sonar signals. As soon as the signals get to an object underneath the water, an estimate of the size of the object, as well as the depth, is taken by the sonar wave. The object could be the seabed, a fish, a rock, or something like underwater plants. The sonar wave is reflected to the device like an echo, and the info is presented to the device.  This information is afterward used to make an image of all that is happening underneath the water. The image is then shown live on your screen for you to interpret.

There exist several types of fish finders, such as fish finders for kayaks, fish finder for salt and freshwater fishing, etc. As an angler, if you are keen on a fruitful fishing adventure, it’s paramount you go for the best fish finders, and nothing less.

Several fish finders adopt more than one frequency to provide its users with the best view, depending on the situation. Higher frequencies provide you with a narrower cone angle, thereby offering a splendid level of information. Lower frequencies give rise to more significant depth infiltration, but the extended range will restrict sensitivity.

As an angler, the type of fishing you aim to partake in will determine the kind of fish finder you’ll adopt. If you want to fish in shallow water, you will need a fish finder with a higher frequency ( of around 200KHZ). Higher frequency works well in shallow water, and they offer you a high level of information. They transmit a higher number of waves and can detect smaller objects in the water surrounding you.

Having being briefed of what a fish finder is, and how it operates, it’s time we delve into the question which has been on the thought of most anglers.